He was born in Granada in 1710, where he began his artistic life as a guitar builder. He moved to Madrid in 1737 and settled in the Calle del Olivar, where he remained until 1743 to move his workshop to the Atocha street in front of the Parador del Sol, where he would work until his death in 1782.

He built a number of violins that are true masterpieces, of an excellent manufacture and a purer Italian-style varnish of exceptional quality and texture. That is why it was presumed he had done his apprenticeship in Italy since, like the best instruments of this school, but Contreras was never in that country, he had the opportunity to have in his hands several violins of the great masters of the history of the In the court of Madrid in which he was a repairman, there were many Stradivari, Guarneri and Amati, who were in all probability lent to him for this purpose or to repair them, and he with his innate ability managed to obtain works of the same characteristics.

Contreras was named <Violero de la Reyna>, being also as we indicated <Reparador of the instruments of His Majesty> and treated like member of the palace staff, receiving orders of the own King and of the Nobility. We know that he built violins for the infants and King Carlos IV, receiving in payment 1,200 reais for a copy.

Not a large number is known, since it has apparently built very few, but the ones it made can be said to be invariably of an excellent manufacture, with an impeccable workmanship, high quality woods, little vaulted, embossed edges enhanced by A filteado magnificently traced, comparable to Stradivari and with a final varnish of a transparency and quality unbeatable. He allowed himself some personal touch in his well doing, since he made stradivari violins with efes Guarneri, and vice versa, but always with a wonder workmanship. It can be considered in all justice the best Spanish luthier of all time. Throughout the exercise of his profession he manufactured the best violins made by a Spaniard to the point that only one lutier in all of history has come to overcome. This granadino is called in the sphere of the musical world the Spanish Stradivarius.

By his birth he was always known by the nickname of El Granadino, an origin that he never hid, as he pointed out in his labels and in the advertisements of the newspapers of the time, which he recorded as the address <Casa de Joseph El Granadino >. Contreras violins deserve high prices today, both in Spain and around the world.

José-Melitón ContrerasSon and pupil of Jose Contreras <El Granadino> born in Madrid, on March 10, 1741, died in this same capital on October 15, 1791.He had his workshop in El Olmo Street, near that of his father and teacher, and like him, he had the opportunity to be a repairer of the instruments of the musicians of the Real Capital.Magnificent work also the one of this luthier developed in its short life since it lived hardly 51 years, reason why is known very few instruments made by his hands. Those who made them, are also copy of Stradivari, according to the canons of the best works of this Cremonese school, with little pronounced vaults, embossed edges and an excellent bill in general, especially in the volute of the head that is of a beautiful Design and a perfect sculptured. Its varnish in red on a yellow background would have nothing to envy those of the best Italian masters. The sound of their violins is also very powerful and velvety, which makes them real concert instruments, so that the prices are also very high

Vicente Assensio, the official violin maker of the Royal House – as the luthier José Contreras “El Granaino” in the Royal Palace – will be in charge of the preservation of the Antonio Stradivari Quartet, later succeeded by his nephew Silverio Ortega and later his son , Mariano Ortega, who also built guitars..Vicente Assensio. Fuentelaencina (Guadalajara), 15-12-1730; Madrid ?, was luthier He was a Spanish priest and luthier who worked in the court of Madrid as a builder and restorer between 1773 and 1795. He was also known as “El Curita” or “El Cura” for his priesthood. His birth certificate includes his parents, Manuel and Rosa, natives of Pastrana (Guadalajara) and residents in Fuentelaencia. In this same town is born his sister, Isabella, mother of Silverio Ortega, his disciple and successor in Madrid as violero of the royal house. It is unknown how he gets to learn the trade of, although it is likely to be copying instruments of known authors, which he had access to when he was in contact with the court. The luck of living a golden age of music in the Royal Chapel of Madrid allowed many instruments of the best luthiers such as the Stradivari, Amati, Guarneri, Stainer, etc. to pass through their hands, which will serve as a model and learning for Their future constructions. Their violins and cello are of an extraordinary construction and of a wide and powerful sonority, comparable to the timbre of Italian.

My instrument carries the label of the oldest instrument known to it, a violin from my private collection of 1791 which says:«Vicentius Assensio Pxesb. / Feciebat Matti anno Dni / 1791 Num 31 ‘ (Included in the book: The Goden Age of Violin Making in Spain by Jorge Pozas, Tritó Editions)

Type of object: Violin, violin, viola, celloAuthor: Antonio Stradivari (1644-1737)Date: 1709/1709/1696/1697Location: Madrid’s royal palaceInventory number: 10076030/10076031/10076032/10076033Description: Known as the “Royal Quartet” decorated, it is currently composed of two violins (one large and one small), a viola and a cello. It seems that the Creonist Antonio Stradivarius believed that Charles II as a unitary group and decided to offer it as a gift to Philip V, during his visit to the city in 1702 and tells the story of Desiderio d’Arisi, an intimate friend of the builder. For political reasons of the War of Spanish Succession this delivery was not allowed. Initially he had made another set with decorative motifs for the Medici family, which is not kept together. Seventy years after its manufacture, Carlos III orders to Father Brambilla the acquisition of the then quintet for his son, the Prince of Asturias and future Carlos IV, on his trip to Cremona. A tenor viola disappeared in the War of Independence completed the current quartet. The instruments had been inherited by two sons of Antonius, first by Francesco and then by Paolo.As for its history in the Court, newcomers were integrated into the Chamber Orchestra of the future Carlos IV, for the interpretation of classical music. Vicente Assensio, official violator of the Royal House, will be in charge of his conservation, succeeding him later his nephew, Silverio Ortega and later his son, Mariano Ortega. During the eighteenth and nineteenth century some interventions were made in the instruments. The most aggressive was the one suffered by the current cello, which originally was a bass guitar and dwarfed to adapt to the musical fashions of the moment. When in 1814 the inventory is made by order of Fernando VII it is detected that the two violas are missing. In 1836, they were incorporated to the Royal Chapel until its dissolution during the Republic, 1931. During the Civil War, they were guarded in the Museum of the Prado. In 1950, one of the stolen violas was acquired at Casa Hill and the group acquired by Carlos III was partially recovered, forming a quartet. 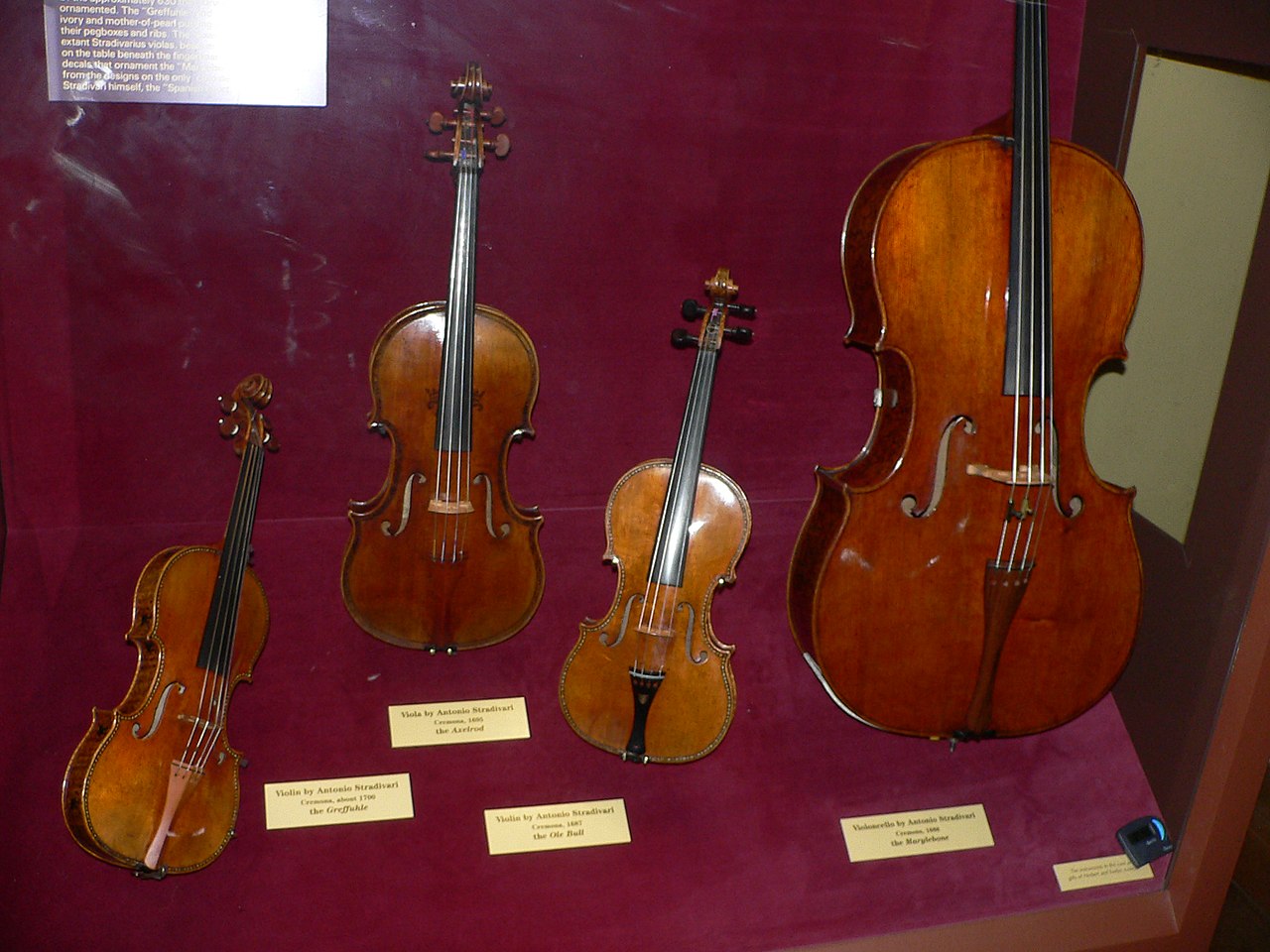